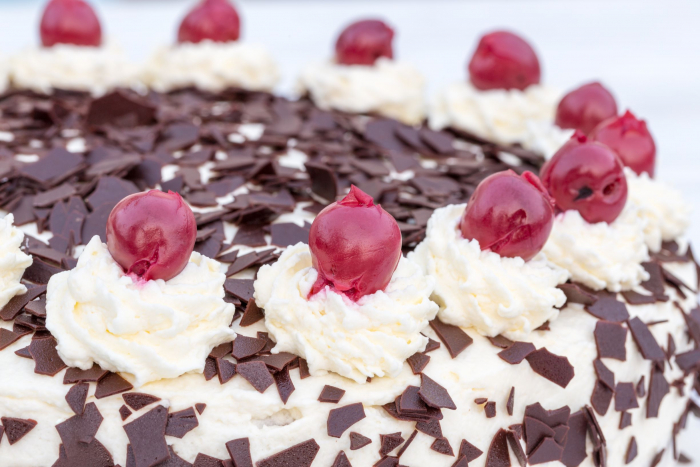 Ref: 503
Heading: Bread & Baking
Cuisine: European (other)
Food Type: Vegetarian
No of Portions: 8
Change no of portions required to :
*Original recipe was for 8 portions you may need to adjust some ingredient quantities accordingly
SHARE
Print
Write My Version - Login

Step 2
To make the cake, add eggs & caster sugar to a bowl & beat with an electric hand whisk or in a food mixer for at least 10 mins until pale, add vanilla & beat in, in another bowl add flour, salt, cocoa powder, mix powders together then fold into the egg/sugar mixture with a silicon spatula.

Step 3
Pour cake mixture into 3 X 22 cm loose bottom spring-form cake tins, place a round disc of greaseproof paper at the bottom then grease tin with butter, divide the mixture equally between the 3 tins, place in the oven for 20 mins then check if they are cooked by sticking in a wooden skewer or a cocktail stick, if it comes out clean is done, if not put back in for another 5 mins, when cooked remove from the oven & allow to cool, remove from the tin, place on rack to go cold.

Step 4
Shave the chocolate with a potato peeler into a bowl, then put in the fridge to go cold.

Step 5
Make the syrup by placing sugar in a bowl the pour over the boiling water & whisk until the sugar has dissolved then add cherry jam whisk in the add the kirsch mix & set aside.

Step 6
Make the kirsch cream by placing the cream, sugar & vanilla in a bowl, beat with an electric hand whisk or in a food mixer until just firm peaks, then fold in the kirsch, set aside in the fridge.

Step 7
To finish the cake, if the cake is domed cut flat with a bread knife, lay the first cake on a decorators cake stand (best) or on a board, coat the top of cake with the syrup using a pastry brush & allow to soak in, then spread half of cherry jam across the top, then a thin layer of the kirsch cream, then place the next layer of cake on top, brush over more syrup then spread the rest of cherry jam, then a thick layer of kirsch cream (1cm) then dot 38 tinned cherries on the top evenly, spread some more kirsch cream over the cherries, next carefully place the last cake on top & coat with syrup & the sides, leave for 10 mins to soak in.

Step 8
With a icing spatula or a kitchen palette knife or a piping bag with a star nozzle cover the cake in kirsch cream, dot remaining 12 cherries evenly around the top on the edge, using a flat small surface or your palm of your hand stick chocolate shavings around the edge then sprinkle the rest over the top.

Chocolate cake difficult to see when cooked as its dark so use a skewer or cocktail stick method to see if cooked through. You can use Raspberry jam &/or fresh Raspberries if you prefer.